Package greetings to the Diamond Diploma 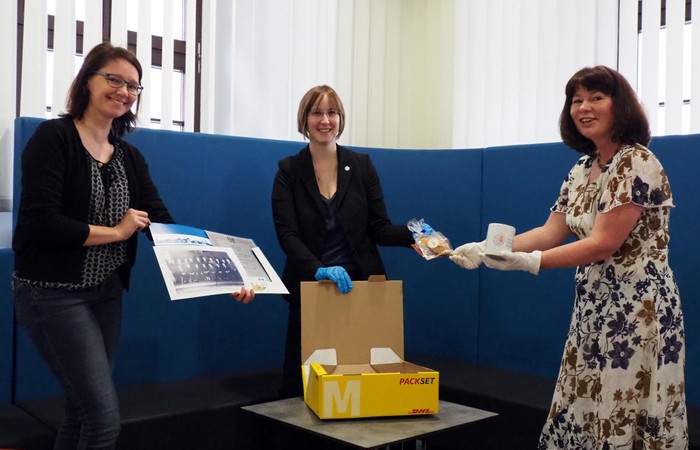 With a jubilee certificate and a historical group photo, TU Bergakademie Freiberg honours eleven graduates of the field of study "Gasfach" of the 1960 graduating class. 60 years after their graduation, the alumni thus receive their Diamond Diploma.

Normally Dr. Klaus Zschoke and his fellow students, who today live in Krefeld, Berlin or Rostock, from the seminar group would celebrate the sixtieth anniversary of their diploma degree at their alma mater. However, this is not possible due to the current corona restrictions. In order to show that TU Bergakademie Freiberg is nevertheless thinking of its graduates, the staff of the Freiberg Alumni Network and Dr. Saskia Wesolowski from the Chair of Gas and Heat Technology now send eleven packages. "The contents should remind our gas experts of their time as students in Freiberg and allow them to take a little look back. For example, a personal anniversary certificate with the rector's signature, a historical group photo from 1960 in the restaurant of the Old Cafeteria, a "Freiberger Bauerhase" (sweety) and a cup with the chair's logo are all part of the postal item," says Dr. Saskia Wesolowski, who is also in charge of the Foerderkreis Gastechnik.

Stefanie Preissler, alumni coordinator for the university, adds: "Every year we supervise about three to four seminar groups with about 30 to 50 jubilarians at the TU Bergakademie Freiberg who actually receive the Diamond Diploma. So it is a rather rare day of honour. However, we hope that the dispatch of the parcels will remain a one-time action and that in the future we will be able to welcome our graduates again directly here on site".