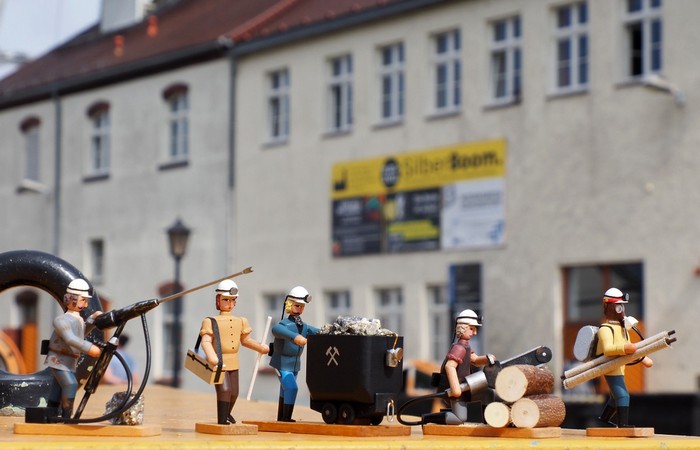 From the driller to the blaster to the mine rescue team - the first five new figures already show the diverse work in the Freiberg ore mining industry in the 1950s and 1970s. They come from the hands of the Seiffen craftsman Siegfried Werner. Photo: TU Bergakademie Freiberg

The quintet was created especially for the exhibition "SilberBoom" of the 4th Saxon State Exhibition on Industrial Culture. The miniature figures were modelled after historical photos of ore mining in the region of Freiberg from the 1950s to 1970s. In addition to the "Zimmerling" or carpenter (34.20 euro), the figures of the "Borhauer" or driller (33.60 euro), the "Sprenghauer" or blaster (25.60 euro), the "Grubenwehrmann" or member of the mine rescue team (29.10 euro) and the "Huntestößer" (32.40 euro) have already been completed. Others are being planned.

"The aim was and is to create figures with which active and former miners can still identify today," explains Frank Reuter, head of the mining operations at the "Reiche Zeche". He himself is also a passionate collector of the miniatures.

The first five figures can be purchased in the foyer of the "Reiche Zeche" Silver Mine Freiberg and in the City and Mining Museum of Freiberg.